And I really thought he would.

I forgot, however, the juggernaut that is Breaking Bad. I blame this lapse on the fact that it has almost been a year since the series finale. Certainly, when the 2013 Emmys aired, I was pulling for Breaking Bad to win every category in which it was nominated. I had seriously binged on the whole series, watching the first 4.5 seasons in around two weeks (no one had warned me of the dangers of binge-viewing) and still reveling in the final episodes. Yet, with the series’ triumphant conclusion airing in late September 2013, I underestimated Breaking Bad’s ability to bring home the goods in August 2014. I’m glad Emmy voters didn’t forget about it because I truly think it is one of the best TV series ever. And I can’t begrudge Bryan Cranston anything. He navigated the highs and lows and nuanced in-betweens of Walter White with enormous aplomb, and he’s so damned charming (even with that mustache). His accolades are well-earned.

Yet, Matthew McConaughey deserved the Emmy for Outstanding Actor in a Drama Series. His portrayal of Rust Cohle in True Detective was breathtaking and revelatory. I’m not exaggerating; his presence on-screen was captivating. It’s a rare thing when you hang on every word, every movement, every breath of a character, and I found present-day Rust Cohle (particularly during his police interview and the conclusion of the final episode) so fully embodied and compelling that I would lean forward in my seat to get closer to the screen. But I have to say my favorite Rust moment occurred after his encounter with Maggie (Michelle Monaghan), when, in an instant, he realized how she had used him and torpedoed his relationship with Marty (Woody Harrelson); his reaction—the exposed nerve of sadness and rage—was heart-breaking. So it wasn’t just about the philosophical monologues, or Rust’s transformation from 1995 to 2012; it was also about the detachment and pain and heroism and struggle that Matthew McConaughey realized throughout the series. He never struck a false note, and it was a beautiful thing to behold. (Woody Harrelson was also brilliant in his portrayal of Marty Hart. Matthew McConaughey had the more obvious showpiece, but Harrelson gave an amazing portrayal of a “decent” guy grappling with decency. His reaction to the Marie Fontenot video was a gut-punch that told us everything we needed to know but couldn’t see; at times, he could be scary and violent, while at other moments, he provided levity that never felt cheap. And the relationship and chemistry between Rust and Marty was key to the success of the series. If Woody Harrelson had won the Emmy, I would have been perfectly pleased.)

I think that True Detective’s inclusion in the “drama series” category, as opposed to the “miniseries” category, placed it a disadvantage. How could just eight episodes of True Detctive compete with five seasons of Breaking Bad? I’m sure that Matthew McConaughey will be OK; as Woody Harrelson reminded him during their awards presentation, with all the honors and awards that McConaughey won this year, there’s no need to be greedy. Yet, seeing the two onstage together drove home how much True Detective needed to be recognized and lauded. I’m delighted that Cary Fukunaga won an Emmy for his deft direction of “Who Goes There”; the 6-minute tracking shot at the end of the episode got a lot of buzz, but his work on the series as a whole represented a major ingredient of the show’s perfectly synthesized combination of writing, acting, cinematography, and music. Still, had I my druthers, Matthew McConaughey would have won as well. 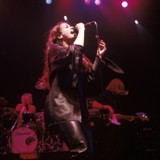